I can’t believe it’s less than a week now.

A year after the definitely wonderful, exhilarating, inspirational experience had in the 2nd Concerto Masterclass & Competition in Budapest, Hungary, I’m making a return to the city to play Beethoven’s violin concerto with the Danube Symphony Orchestra (Duna Szimfonikus Zenekar) this Friday.

I’ve been preparing for this grand concerto for months and years on end, and thanks to all the management of my friendly assistant and the founder of the masterclass & competition, Laszlo Blaskovic, I’m really excited that we’re finally making this happen.

A lot of people don’t know this international masterclass & competition yet as it’s only 2nd year since its birth but it’s really the FIRST concerto masterclass ever to be hosted in the world, and string musicians, pianists and singers gather from all around (for instance, last year we had a pianist from Lebanon).

The best part is, of course, that the winner of the Special Prize obtains a contract to perform in the next season’s concert with the DSO with expenses of hotel and travels covered + the perfoming fees provided.

So I’m very honoured that I have this opportunity to fly from Milan and make my second appearance in Budapest with such an excellent setting. 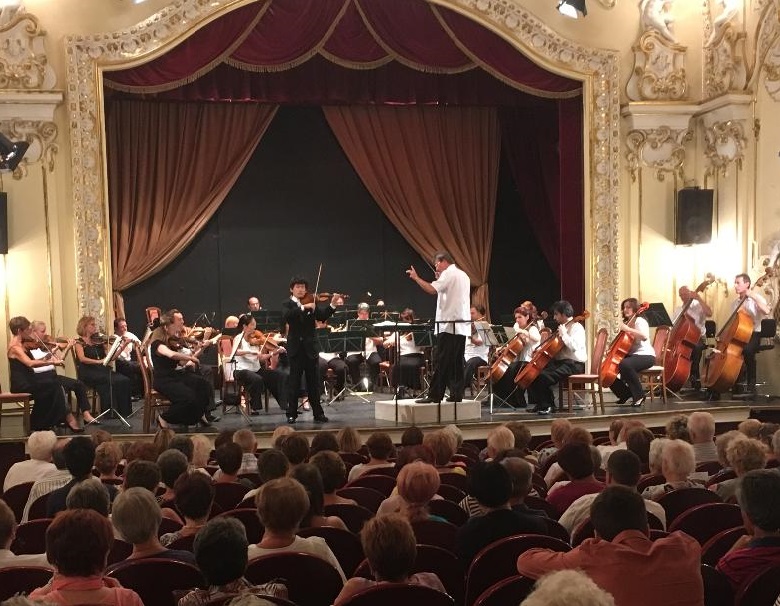 Now, I want to talk a little bit about the Beethoven Violin Concerto and share my view on it here.

This concerto is one of the standard repertoire for violinists in today’s 21st century world, but in a certain way it was an epoch-making concerto at the time when Beethoven wrote it.

With performing duration of about 45 minutes, it was the longest concerto ever written for violin and orchestra up to that point (cf. Mozart, Haydn, Bach, Viotti etc. less than 30 mins).

Is there a story behind the concerto??

Unfortunately, we never know the truth. Very little is said by Beethoven himself. But it is possible to assume the world of Beethoven from other clues.

Although all 3 movements are written in major keys (Allegro ma non troppo: D major, Larghetto: G major, Rondo: D major), many of the passages are full of darkness and obscurity, so much so that it’s hard to associate them with “happiness”.

Every harmonic procedure this concerto goes through has a striking effect created with the exquisite timing of the change of dynamics that owes to much of Beethoven’s symphonic texture.

So what do all these imply?

Beethoven’s paradoxical trait. That’s what this music is all about.

Let’s say you want to sleep, but all the thoughts in your head keep distracting you and you decide to instead get up dancing.

Or you’re furious and raged in fire, but the other side of you tells you to calm down and manage to avoid explosion.

Or you achieved one of your goals or something and bask in the sense of fulfilment, but soon you begin to feel there must be something missing and intrupt yourself from the joy.

Or there’s a beautiful girl you’re secretly falling in love with and dying to tell her how you feel, but the minute you see her you can’t help but run away from her in embarrasment.

In other words, it’s an internal conflict of the desire VS the resistance from it. You want to move in one direction, but the other side of you tells you to move in the other direction.

It’s sort of “Utopia” that is so far and isolated from the real world, and the landscape Beethoven sees is almost as heavenly as in his Pastroral Symphony (No.6).

(Which is why I personally think this movement is the highlight of this concerto and is also the most favourite movement for me.)

So as an entirety, this concerto describes a massive variety of mixed emotions and it’s now clear that it’s a little more complicated than just “happy”.

According to the historical findings, this concerto only began to be slowly understood better with its remarkable features after F. Mendelssohn conducted it in London in 1844 with the violinist Josef Joachim.

Because almost everything that happens in it, as with every other music of his, is unpredictable and revolutionary to the stereotypes most people have torwards how music should be.

But when you keep in mind this Beethoven’s dual personality and pradoxes that I described above which is quite easy for anyone to relate at some point of life, it may open you up to see the music in a new light and realize that he shares the same struggle and conflict through his music that people experience nowadays.

As I write this, I’m pumped even more now and I honestly can’t wait to play this concerto in the Danube Palace. Only a few days left ― book your ticket (the same link you find in the “PROJECT” page) before you miss it.

I don’t know if you’ll see this in time, but I do hope you’ve got some value out of this.